Why not fade to black and leave it all to the imagination? 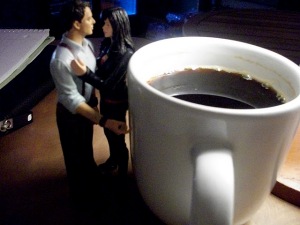 The reader’s imagination is a great thing and shouldn’t be underestimated.

The comments on yesterday’s post made me think about several issues when deciding whether or not to write a sex scene. I’m no expert at writing such things, so this is mostly thinking out loud.

Strictly speaking I’m not writing a romance. The genre of romance requires the happily ever after ending. So if you want your book to be in that romance section of the book store, you must have a the-couple-gets-together ending. I don’t have that kind of ending.

And I’m not writing a book, but a short story. Still—-there is no happy ending.

And well, good golly, that’s not what I’m trying to write!

But if you write a sex scene are you automatically in one of these categories? I shouldn’t think so. I hope not.

I find it odd that people who have no hesitation in writing violence—-using various instruments used to puddle brains on the floor—-become squeamish about writing a sex scene. Sex is at least a normal part of life. Most people are going to have sex. Not that many people (one hopes) are going to butcher their neighbors. Of course, it is probably just such familiarity that makes the subject difficult.

Of course, we’ve all heard—-and any glance at advertising will tell you—-sex sells. This isn’t enough of an argument to include a sex scene, unless selling is all you’re interested in. First, there are people who don’t want to read stories with sex scenes. Second, nothing should be in a story that doesn’t reveal character or move the plot.

Well, how a character thinks and feels about sex reveals character, and whether or not the character has sex probably does move the plot.

But in the story I’ve been working on, can the intimate relations between the characters be off-stage?

The tension in the story starts with will he or won’t he cheat on his girlfriend? And I really want the reader to sympathize with my main character. I may loathe the likes of David Vitter and John Edwards (the list is long there, but we don’t have time for that), but I also don’t think every person who cheats is an automatic sleaze. That’s too simplistic. If I’ve done my job, you might think the character an idiot, but you might feel kind of sorry for him.

And I don’t want the reader to think the main character has left his moral conflict at the door.

To up the tension in the story, the main character may very well be caught. Sure, the girlfriend could catch him by finding a letter, lipstick on his collar, or text message, but let’s be honest, that just doesn’t have the immediate drama of being caught in flagrante delicto. I’m not saying he is caught. (spoilers!) But he might be.

And what I would really like if I could pull it off is to create a conflict for the reader—-to want him to get away with what he’s doing but not want him to hurt his very nice girlfriend, to want him to get what he wants but to feel bad for rooting for him.

This isn’t going to be a story for people who live in a black and white universe.

This brings me to a conversation I had with coworkers last week. It was a conversation that got a tad bit out of hand, and it started with the question: what is sex? Trying to come up with an answer led to more questions such as is oral sex sex or is rape sex. I am so not trying to answer those questions here (we didn’t really answer them at work either–thank goodness), but it seems that if you’re going to consider whether or not to write a sex scene, you ought to be clear about what you mean and what that might encompass.

This sure is an awful lot of rambling on for a story that may not even be any good. But at least you’ll know a lot of thought went into it.

Your thoughts would be appreciated!

13 thoughts on “To Write or Not Write That Sex Scene”