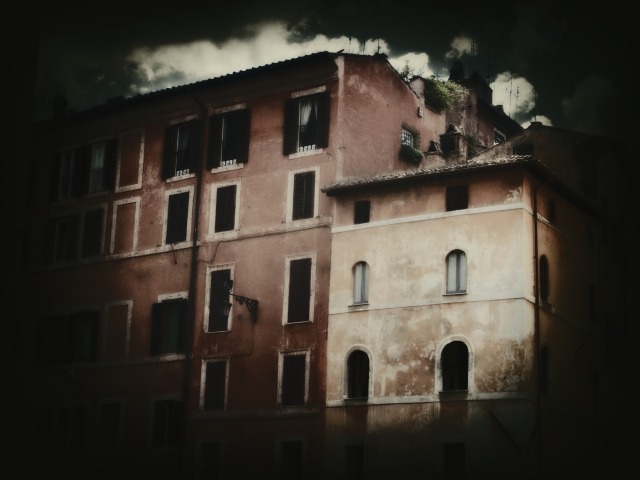 If you subscribe to Tiny Letter, you’ve already got this. Also, I think I’ve finally figured out how I’m handling this from here on out. Thanks for reading!

Nurse Stillmark walked calmly down the hall. She looked straight ahead. Looking at the security cameras was a mistake. Looking brought unwanted attention.

The boy couldn’t be far. No one ever escaped the Asylum. Ever. Maybe they disappeared, but they didn’t escape, and a small dumb boy would find escape impossible.

She got closer to the front door where someone continued to knock, and for the first time she considered the boy might have been taken. Maybe someone had stolen him. Such things had been tried before but never successfully. No one who broke into the Asylum ever got out again.

Nurse Stillmark reached the front door where the doorman waited rocking back and forth on his heels. She shook her head. No one alive in the outside world wanted the boy. No one on the outside knew he existed.

She turned to the doorman. “George,” she said. All the doormen were called George. The name of the doorman didn’t matter and it saved money on nametags. “Do explain.”

George nodded his head at the door and the continuous knocking. “Two young men, ma’am.  Both about 140 pounds, I’d say. But one about 5’6 and the other 5’10. They’re wearing black. One is playing sick and the other is playing helper. My guess is they’ll pretend to be brothers.”

“How did they get on the grounds? No one’s opened the gate,” Nurse Stillmark said. If any of the staff opened the gate without clearance, heads would roll. She went through her mental list of everyone on duty.

“Don’t know yet how they got to the front doors, ma’am, but they’re right liars,” George said. “I can tell. They got no call to be knocking here ‘cept idle curiosity and trouble-making. I can spot them a mile away, I can. Teenagers should not be let to be bored, ma’am. They…”

“Yes, George, I understand. If they’re lying, why’ve you not gotten rid of them? I’ve rounds to do.” Nurse Stillmark liked scolding George. It kept her calm. “Isn’t taking care of the locals your job?”

George nodded again at the door. “Right you are, ma’am, but you seem to have forgotten what happened to the last pair that turned up on our door drunk as soup is wet. I sent them straight away, did I not, ma’am? And that did not end kindly.” He took a deep breath. “I been instructed to get approval before shooing the pests away, and management isn’t to be disturbed, ma’am, as you well know. Not for love nor money. Only for fire and maybe a suicide. So.” He nodded at the door one more time. “That leaves you.”

“Don’t appear to be. They is mighty intent on being let in.”

“Open the door then. You’ve got things ready though, just in case?”

He grunted and dragged open the heavy doors. The boy doing the knocking nearly fell inside. Nurse Meredith took note of the white cat hair all over his black hoodie. “We don’t have time for curiosity seekers,” she said. “You’ll disturb the patients with your racket and we aren’t a freak show.”

A few stern words cowed most silly teens on a prank.

The first one thrust his hand out. “Hello. I’m…Brad. Sorry to bother you. Really. I…I…know you must have a lot to do what with the folks you’ve got to help and all.” His smile twitched. “But this here is my brother, Nate, and I think he needs help.”

Nate didn’t move. He leaned against the side of the door, the hood of his jacket hiding much of his face. He gave a low moan.

“If he’s sick, take him to a hospital. We don’t deal with stomach flu or,” Nurse Stillmark paused. “Too much beer.” She gestured for George to shut the door.

The boy calling himself Brad didn’t move. “That’s not the kind of sick he is. He’s…” the boy lowered his voice. “I think he’s going to hurt himself.”

Nurse Stillmark rolled her eyes. “You don’t meet our criteria. Please take your brother to the hospital in town. I’m sure you know the way.”

“You’re lying to me, and I want you to go. Go, or you’ll regret it. We’re quite used to dealing with your kind.”

“Our kind?” The quiet one, Nate, spoke. “What the hell is that supposed to mean?”

“It means I’m going to call security.” The nerve of these brats. She had important things to do. They wanted to peek in and stare and have a story to brag about later. Part of her wanted to let them in. Let them in and lock the door behind them.

Nate stepped towards. “My brother here says I’m sick and you’ve got to take care of me. You have a…duty of care.”

“I’ve a duty to get you out of my way,” Nurse Stillmark replied. “George, call security.”

Nate laughed. “You think you’re so smart. You think this place is so secure. Well, I know it isn’t. I know…”

Nate pushed his supposed brother away. “I know that if I really wanted in here, all I’d need was a hook and a rope.”

“I’m sorry,” this boy continued. “I thought this was the place, but I’ll take him to the ER instead. Sorry to bother you. As you can see, my brother says crazy stuff. Makes stuff up. Gets into fights.” The possible Brad laughed nervously. “But we’re going to go. Thanks. And really. Sorry. Very sorry.”

Nate quieted, and the two boys stepped back onto the portico. Meredith kept her eyes on them until George had the door shut. “On second thought, George,” she said. “I’m not sure those boys should leave the grounds yet. Call security like I said.”

“It could get messy,” the doorman said.

Nurse Stillmark scoffed. “Nothing we can’t clean up.”

George nodded and turned to the phone at his podium.

Nurse Stillmark thought about what the one teen said and about the missing boy from the upstairs room. “George, I’m going to walk the grounds.”

“Security will do that bit, ma’am.”

“It can’t hurt for me to take a look around myself.” Nurse Stillmark had never gone to take a look when security could do the job, and George gave her a funny look. “Or I could send you,” she said knowing that he never wanted to walk the grounds. He liked his post and nowhere else.

“That won’t be necessary now, ma’am. I know you’re free to walk these grounds as pretty as you please.”

A few steps away from the front door, Nate punched Clem in the arm. “What the hell, Brad? Brad? Where’d you come up with that? Oh, and you lie about your name, but tell her mine?” He made as if he would throw another punch. “You’re ten miles past stupid. You know that?” He dropped his arm. “Damn.”

“Sorry.” Clem rubbed his arm. “It was hard to think in there.”

“You can’t think anywhere!” Nate swung at the air and kick the dirt.

“Hey, you almost gave Han away. I didn’t do that.” Clem marched ahead, still rubbing his arm where he’d been punched.

Neither boy noticed any other sounds. They were too angry. Nate darted up behind Clem. “Don’t you ever call me your brother again.”

“I thought it would be more believable.” The front gate wasn’t that far away. They were almost free of the place.

“You aren’t fit to have my brother’s name in your head. You know, I don’t know why Hannah spends two minutes with you.” Nate stalked behind Clem as they approached the gate. “You must remind her of a stray dog.”

Clem stopped, and Nate crashed into him. “Leave Han out of this.”

“Leave her out? She’s the reason we’re here.” Nate steadied himself. He prepared himself to take another swing.

“Han’s the reason you…” Clem’s voice trailed off. Five figures stood a few yards away between the two boys and the gate. “Um, Nate,” he whispered.

“She called security after all. That harpy.” Nate spat. “To hell with them. What’s the worse they can do? Call our parents?” He bounced a bit from foot to foot as if he were in a boxing ring. “Like I care.”

Nate shook his head. “They don’t look like they call parents.” And he was right.