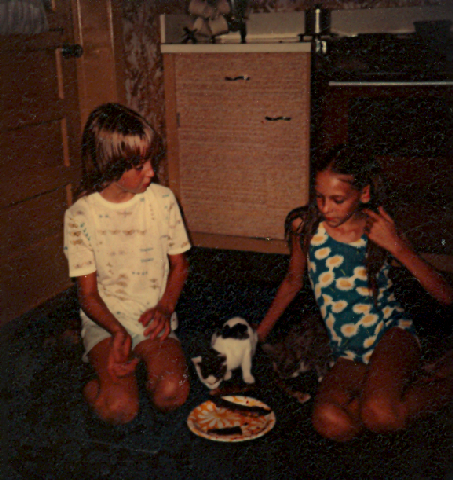 I don’t have many pictures of my step-sister. The ones I had, her mother took when they left.

These holidays are weird. At least, I think they are. My Facebook feed is filled with sibling photographs. They’re great. I cheer everyone who loves and can stand to be around their siblings.

It’s one thing I’ve long admired about my cousins. They all have siblings. They all seem to love each other dearly.

I’m an only child, and I’m glad I’m an only child. All the stereotypes aside, I don’t mind being without brothers or sisters. Once in a great while, I wonder what it would be like, but then I think about it. Growing up, adults told me frequently how lucky I was to be so “stable” and “sane” considering my childhood. Well, if these adults were correct, what are the odds two children could have grown up that lucky?

I didn’t grow up with the best role models of sibling adoration. My dad had two brothers and six sisters. Sometimes a few of them would visit us. I think my dad loved his siblings. Some of them anyway. One of his brothers at least. But I didn’t grow up witnessing his love for them. We didn’t visit them. He never spoke badly about them. He shared funny stories about a few. But he waited something decades to visit his own family.

Sometimes I would ask him why we didn’t visit his siblings and my cousins. I wanted to. I had a very romantic idea about life must be like for all my cousins, spending holidays together and all sorts of things. They all knew each other and I was far away from that.

My mother had siblings too. But it was complicated. She had a brother who as killed before I was born. She loved him fiercely and it broke her heart. She wanted me to be a boy, to be like him. I think she got over wanting me to be another him, but she missed him and I, like most children born after the death of a loved one, didn’t really understand. But I imagined that if he had lived, he’d be the perfect uncle and he would love him and take me for ice cream and listen to my troubles.

My mother’s other brother had problems, the least of which seemed to be his deafness. Most of my childhood he loved in a home and had to be reintroduced to me every time I visited him. “Scottie, this is Marta, your nice.”

After my parents divorced when I was four, I wished for a sister. When my dad married a woman with a daughter just a year older than me, I was excited. A sister! I had prayed very hard and now I had one.

She wasn’t like me. She didn’t care about books or grades. She didn’t care about pleasing adults. She fought. She cursed. She smoked and snuck out with boys at the age of 14. She’d beat me up but defend me against anyone else. When a sixteen year old showed an interest in me (much to the horror of my 13 year old self), she stepped in front of him and told him to back off.

For a while her mother tried to convince people she and I were twins. She dressed exactly alike, and while we didn’t look alike, we didn’t look drastically different. People would would tilt their head and seem puzzled. It was almost believable.

My step-sister and I fought and disagreed about everything. But for a few months in 5th grade, we had to share a room and a bed. We’d stay up late playing with glow-in-the-dark skeletons and making up stories. We’d giggle in the dark. She’d shine a flash light up to the tennis ball-sized disco ball hanging from the overhead light.

But her mother was crazy. I had to leave because I thought I couldn’t survive in that house with that woman. But whatever, my mother agreed to take me in. And after I left, my step-sister wrote me a letter. She wrote several things but one thing she wrote has stayed with me ever since. “How could you leave me alone with HER in this house?” she asked. “I have nowhere to go.” That crazy woman was her mother, after all.

I cried. I felt terrible. Guilty. She was supposed to be my sister, wasn’t she? She had protected me, hadn’t she? But I also knew that I wouldn’t go back, not even to save her. I had an escape, and I couldn’t bring her with me.  We had just finished 6th grade.

Eventually, my dad and my step-mother divorced. After upending our lives, my step-mother finally left for good. I was 18 before I saw my step-sister again. I was home visiting from college and she had dropped out of high school. She was living with an addict. She needed money, and I gave her five dollars. It was all the cash I had. She promised to pay me back, and I nodded, not believing her, that letter she’d written me still in my thoughts. “How could you leave me alone with HER in this house? I have nowhere to go.”

That was 30 years ago and I haven’t seen her since. Although I saw her mug shot online though a while back.

One thought on “Sibling Day, I suppose”