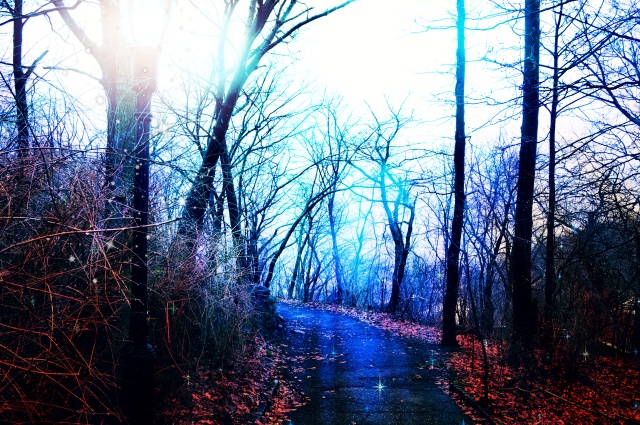 Now that I’m 21 days into Story-a-Day September, I’m wondering what aspects of my manuscripts backstory are most important to explore. And I don’t want to give too much away here either.

But here’s what I managed for today. Thanks for reading!

Tas, lost in thoughts of all she’d learned that day, didn’t see the wolf until it was too late. She stared at the wolf and the wolf stared at her. Beatrice, her strange pet, a rabbit with wings and a lion-like tail, jumped forward as if she could take on a wolf with her small rabbit teeth and wings that barely worked. Slowly, Tas scooped her pet into her arms and held her close. “Sorry,” she whispered. Beatrice had tried to warn her but she hadn’t listened. Once again she hadn’t listened.

“Let the wolf speak first,” her parents always said. “They where the story begins.”

Perhaps today Tas wouldn’t test her parents’ advice. Just this once. Beatrice’s long tail swished and hit the back of her leg. The forest trees arched overhead like nature’s cathedral, evening light spinning between the leaves. Beyond the curve behind the girl and her pet lay the town, surrounded by its electrified fence and magical contracts. Beyond the other curve, a good ways behind the massive wolf, lay Tas’s home and her parents, her mother undoubtedly in her lab and her father chatting with someone important over coffee in the kitchen. Neither knew when to expect her home. They had faith in the path through the forest.

“Young of the Woman.”

Tas heard the words in her head and understood. There may have been thousands of women, but for them there was only one Woman. The woman who ventured into the forest with vials and needles and pouches, her sharp eyes that searched for mysteries and miracles. “Yes, I’m her daughter.” Beatrice flapped her wings, striking Tas in the face.

“Give her message from Queen.” The wolf’s gray eyes, level with Tas’s own gaze, didn’t blink. “Queen says to Woman, no. Woman asks too much. We not want her witchcraft.”

The wolf stretched, its nose coming close. Tas sensed the disapproval, the disdain. But then the wolf moved back, and a moment later it disappeared into the woods.

Tas held Beatrice close, waiting until both their hearts were steady. “Oh,” said Tas. “You must’ve scared!” Of course the wolf could’ve taken Beatrice away with one bite. “But we’re okay. We’re perfectly fine.”

“No, I don’t know what mom asked of the wolves. But you know mom. She probably wants a vial of their blood or a drops of their tears. I guess it is witchcraft. From a certain point of view.” She placed Beatrice back on the ground. Beatrice stared up at the child. “You know mom won’t listen. Not even to the queen of the wolves.”