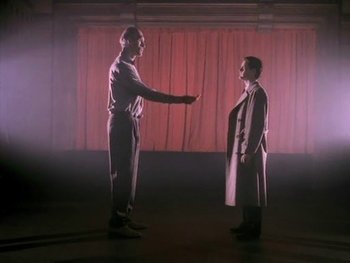 Recently I wrote about Star Trek‘s place in my life. But I first fell for Star Trek as a child. Some loves came into my life later.

Twin Peaks premiered after I’d moved to Ohio for grad school. I’d made a few friends at Kent, but I felt alone and out of my depth in my classes. In my studio apartment I watched the pilot episode of Twin Peaks. Agent Dale Cooper caught me right away.

I’ve loved murder mysteries since childhood and Perry Mason television and Agatha Christie books. I don’t know why. The puzzle. The satisfaction of the bad guy going to jail (usually the case in Mason, Christie, and mysteries of the time). Clue was the only game at which I could beat my mom.

And Twin Peaks was weird. I hadn’t seen anything like it before. Had you? Most of my friends didn’t watch it. It was too creepy. My own writing has been accused of being too creepy from time to time… I say it is my Florida blood.

I got a Who Killed Laura Palmer tee-shirt. I bought the soundtrack (cassette!).

Sometimes even now I think the music would fit bits of my own writing. Though I’m probably deluding myself there.

The idea of the strange woods and the quirky people reminded me of my favorite novel from my teen years. The scene in my novel, The Blue Jar, where the girls go to the woods was written with these other woods in mind–even though my novel takes place in Florida, Twin Peaks takes place in the northwest, and The Truth about Unicorns takes place in upstate New York. Haunted woods are everywhere. They’re in fairy tales. And I love fairy tales.

What tv shows influenced you?

2 thoughts on “Welcome to Twin Peaks”