Are you ever too old to play with action figures?

Then I got Shakespeare. Then Captain Jack Harkness.

One afternoon I thought about posing them in front of an image from a coffee table book. I posted it on facebook, and my friends liked it. Nothing gets you to repeat something as much as approval. At least, usually. I’ve written tons of stories and several novels, but few things get as quick approval as something visual. That’s why we have memes, isn’t it? It’s much easier to pass a meme around than a novel. 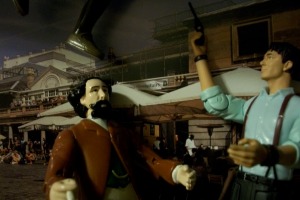 Well, I’ve been collecting Doctor Who action figures and taking pictures ever since. Sometimes someone asks me, “Why? What’s the point?”

Because it’s fun. Isn’t that an okay answer?

What possibly silly thing do you do just because it’s fun (and maybe a few people think you’re strange for doing so)?